Short stature is not a problem anymore. Due to advancements in orthopedics, we can easily gain additional centimeters and equalize limb length with respect to proportions of the whole body.

Height distribution in a given population forms a bell-shaped curve, the so-called Gaussian curve (normal distribution). Its top represents the mean value that is characteristic for the highest percentage of the population. Normal height values are considered to fall within ±3 standard deviations (SDs) from the mean value. In the case of people unaffected by dwarfism or growth hormone deficiency, a height below 3 SDs from the mean value is considered short stature. For a physician, normal height is between the 5th and the 95th centile. The lower threshold for so-called normal height for men is 166 cm, while for women it is 153 cm.

This affliction is related to the actual height, however, there is no threshold value above which one is safe from height dysphoria. Most of us assume that dissatisfaction with one’s own height can only affect “short” people. But the problem is that the perception of short stature may vary widely depending on racial, national and cultural factors; 178 cm is a lot in India, but not that much in the Netherlands.

This may be illustrated by the following anecdote by Dr. Dror Paley:

“A man flew to me from as far away as the Netherlands to consult the possibility of limb lengthening. He was 180 cm tall. He told me that even as a teenager he felt short. He was the shortest man in the family – even his sister was the same height. All of his friends were much taller. He reminded me that the Dutch are the highest people in the world. We were of the same height. I never considered myself to be a short person and have never heard such an opinion from my family or friends. That is why it was difficult for me to consider him eligible for a limb lengthening procedure. I referred him for a psychological consultation. The psychological report confirmed that the patient had the same problems with their body image as all other patients we have consulted. Despite being objectively tall, he was suffering from height dysphoria. While studying the relationship between height and the diagnosis of height dysphoria, we have determined that the initial height of our patients was between 147 and 180 cm for men and between 137 and 173 cm for women. Although most patients were closer to the lower range limit, the presence of people in the higher range indicates that the main issue is not their height itself. What is most important is their own perception of height and proportions – something we call the body image. Body dysphoria is a body image disorder. The patients consider themselves short regardless of the actual height and other people’s opinion.”

In practice we have learned how not to be biased by our own opinions while confirming eligibility for the procedure. What is important is how the patient feels. When it comes to the procedure-related risks, there are no additional risks for tall people. In theory it should be even lower, as the percentage increase of bone length in relation to the whole body size is lower.

At our Institute, we use the most advanced technologies currently available in the world. We allow our patients to enjoy a taller posture by using special implants intended for limb lengthening. The procedure involves implantation of a telescopic intramedullary nail (a tube-like device placed inside the intramedullary canal of a bone). The nail is equipped with a special gear with an electromagnetic motor that, due to the externally applied magnetic field, causes the elongation of the nail. No implants need to penetrate the patient’s muscles and skin, and the implantation is performed through a minimal skin incisions of a few millimeters in size. The best method available today is the PRECICE/STRYDE technology from NuVasive. It is the only FDA-approved device in the market so far. Precice sets itself apart by ensuring perfect elongation rate control and low pain profile, as reported by our patients during the lengthening process. Moreover, Precice is the only marketed implant that allows to reverse the lengthening process. Reversibility is crucial for the safety of the procedure. Currently, we use third generation NuVasive nails – the newest and most robust version of the device. Since 2019, at Paley European Institute, we have been using the next generation STRYDE nail that is made of medical steel. This allows for full weight-bearing on the operated limb during the lengthening phase. It was limited in the case of titanium PRECICE nails.

Most of the patients dream about becoming taller by an additional 7–8 cm or sometimes even more. The PRECICE 2.2 technology (developed as a result of collaboration between Dr. Paley and Ellipse) has been approved by the American Food and Drug Administration (FDA). Precice and STRYDE nails allow to achieve maximal lengthening of up to 8 cm. Patients who wish to gain more than eight additional centimeters should consider another lengthening procedure for the second bone (first the femoral bone and then the tibial bone or vice versa). Two lengthening procedures allow up to 13 additional centimeters in total (8 cm of the femur and 5 cm of the calf). Tibial lengthening by 8 cm is not well tolerated; even exceeding 5 cm may lead to serious complications. Most patients tolerate no more than 5 cm within the lower leg bone. Obviously, the cost of two lengthening procedures is almost twice as high as the cost of a single procedure. Although the nail structure is adapted for up to 8 cm of lengthening, not every patient can safely achieve such a result, even for the femoral bone. At our center, we lengthen limbs only as much as the patient’s bones and soft tissues allow. SAFETY first. We will not suffer the risk of deteriorating physical performance to gain an additional centimeter. There are several lengthening strategies that allow for achieving optimal results for each procedure. Here are some of them:

Options 3, 4 and 5 involve both tibial and femoral lengthening.

Lengthening of both bones allows to achieve a taller posture and better body proportions of the thighs and lower legs. However, such a two-stage procedure requires more effort and is more expensive than the lengthening of only one pair of bones. Occasionally, it is also associated with more intense pain complaints, if both stages are performed at the same time. There is no practice of placing nails in the femoral and tibial bones as part of one surgical procedure due to theoretically increased risk of a fat embolism formation as a result of drilling the intramedullary canal in more than two bones at once. Implantation of 4 nails during one surgery would increase the risk of fat embolism formation and death. We have successfully performed such a procedure in two patients without complications; however, for safety reasons, we do not recommend and even do not offer such an option today. 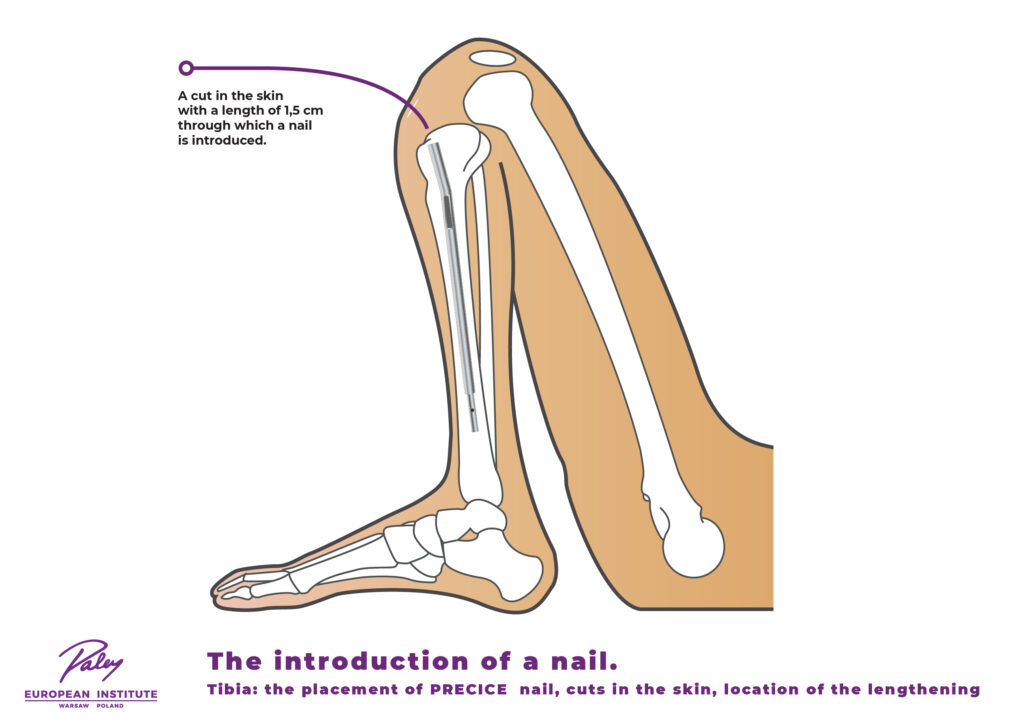 Option 3 allows for a reduced treatment duration through the simultaneous lengthening of the femoral and tibial bones. We begin the procedure with the tibial bones and, after three weeks, continue with the femoral bones.  The indicated sequence results not only from slower regeneration of the tibia when compared to the femur, but also from the fact that placing a nail in the tibia requires maximum flexion of the knee joint and this could be difficult if muscles were already tense as a result of femoral lengthening. Treatment takes approximately three weeks longer in comparison with option 1.

Option 4 allows for maximum lengthening of the femur, as femoral and tibial bones are lengthened separately. Such a procedure requires more physical therapy and time. This option is more time consuming, because two lengthening procedures are performed independently of one another at an interval of one year.

Option 5 is noteworthy, as it enables achieving the maximum length increase, while simultaneously providing the highest level of safety. A Precice/Stryde nail allows for lengthening up to 8 cm. It is impossible to achieve such lengthening in the tibia in one go without weakening the calcaneal tendon or the necessity of plastic surgery (leading to permanent weakening of the spring phase during walking). However, it is possible to safely achieve 8 additional centimeters in the tibia, provided that the procedure involves two stages performed at an interval of one year. To achieve the maximum lengthening of up to 16 cm, the tibial and femoral lengthening procedures must be performed simultaneously; the timespan between surgeries should be three weeks and lengthening for each bone should not exceed 4 cm. Then a break is necessary to enable bone tissue healing. A year later, the femoral, tibial and fibular bones may be cut again, the implant reactivated and the lengthening continued. This way it is possible to lengthen each bone by the remaining 4 cm. 4 cm is not much when it comes to bone lengthening, thus the risk associated with such a procedure is significantly lower. The discussed strategy is therefore very safe and allows for reducing the duration of a single stage. The first stage lasts 11 weeks, during which the femoral and tibial lengthening achieved is 4+4 cm. Since the nails are already in place, there is no need to perform two surgeries as part of the second stage. What is more, the bones may be cut once by making very small incisions. The most significant disadvantage of this method is its cost – it involves three separate surgical procedures. Hence the cost here is higher than for the other options.