We are certain that there is a solution to every problem in the skeletal system. Based on comprehensive examinations and a detailed case discussion with the patient, we are able to formulate a precise diagnosis. Various limb reconstruction techniques allow us to shape the bone tissue or even create a new bone where there simply is none. Synergic collaboration with a hospital allows us access to state-of-the-art orthotics and to collaboration with anesthesiology and pediatrics specialists. Our center is where our expertise and skills allow us, without any limitations, to secure the best results for our patients.

The techniques we use include, but are not limited to:

Deeply analyzed innovation is the best description for the approach that is fundamental to our success. Through our involvement in research and educational activities, we receive a constant influx of feedback from our patients and colleagues from the field, who, by questioning our methods, contribute to the continuous improvement of their quality.

Patients visit us to receive the best care available and our mission is to provide such care to each and every one of them. We focus on providing the services we specialize in. In the case of procedures that extend beyond the scope of our qualifications, we refer our patients to other renowned specialists. This way we can guarantee the highest standard of care. 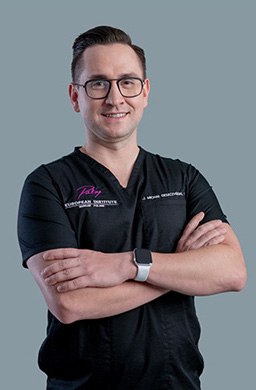 Graduated in medicine from the Medical University of Warsaw; completed a post-graduate Clinical Study Methodology course at the Medical University of Warsaw. In 2016, he defended his doctoral dissertation on high tibial osteotomy. He completed an internship in Pediatric Orthopedics and Musculoskeletal System Deformity at Paley Institute, West Palm Beach, Florida, USA. He was the head of the Pediatric Orthopedics and Musculoskeletal System Deformity Treatment Department at the Medicover Hospital in Warsaw.

His biggest authority in the orthopedic field is his father – Jarosław Deszczyński Senior, who taught him the importance of empathy and respect towards others. In his medical practice, he focuses on cooperation and ensuring maximal comfort of his patients.

He repeats the words of his mentor: “A surgeon is as good as their last procedure.” Dror Paley

He is a father of two. He loves Star Wars and classical music. His interests are new technologies and aviation. 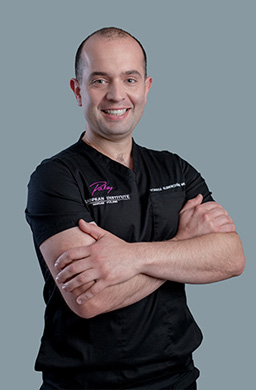 Graduate of the Medical University of Warsaw. He accumulated his experience in orthopedics at the Chair and Teaching Department, Second Faculty of Medicine, Medical University of Warsaw. After that, he completed an internship at Paley Institute, West Palm Beach, Florida, USA. It helped him build solid foundations for his future professional growth.

He successfully implements innovative solutions into his patients’ treatment processes. As he says himself, he is a surgeon through and through. The operating theater is where he feels at home.

In his medical practice, he follows the highest standards. The word “compromise” was eradicated from his vocabulary a long time ago and he expects the same from his coworkers.

He lives by his credo: “In life, you either have results or excuses” Canfield Jack.

In his personal life, he is the father of two and his interests lie with the automotive industry, especially the technology behind engines. 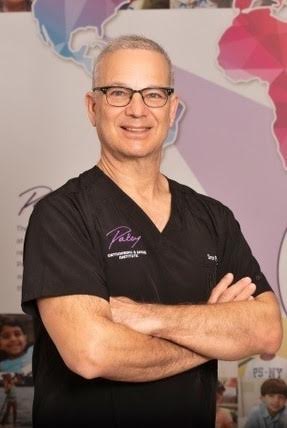 A world-famous orthopedic surgeon who has performed over 20.000 orthopedic surgeries for children and adults, especially limb lengthening and surgeries related to deformation correction and joint protection. Founder and director of the Paley Institute in West Palm Beach, Florida, graduate of the University of Toronto.

At the age of 30, he gained experience and apprenticeship in Kurgan under the supervision of Russian prof. Ilizarov (Ilizarov method). Then he began to develop the methods he had learned himself. In 1986, he introduced the Ilizarov method in the United States and Canada, where he has performed over 20,000 treatments related to limb lengthening and deformation correction.

His four grandparents were born in Poland. The origin of his ancestors and the impression made by Polish doctors – Dr. Jarosław Michał Deszczyński and Dr. Tomasz Albrewczyński, who were on an internship under a special scholarship program at the Florida center, made the Paley European Institute established in Poland. He is the author of over 130 publications and many textbooks on limb reconstruction in conditions such as hypoplasia of the femur, lack of fibula or lack of tibia.

His book, Principles of Deformity Correction, set a new standard in understanding and treating limb deformities. He is currently completing the publication on congenital deformities of the lower limbs. Privately, a father of four. He enjoys fitness training, cycling, skiing, climbing, diving, nature photography and studying history.