External fixators allow to control the lengthening process. They create a type of external “scaffolding,” hence their name. These apparatuses are made of durable metal, because their function is to ensure bone fixation during the lengthening process. Sometimes the bone that needs lengthening is too small for the state-of-the-art magnetic extension nail to be placed inside the intramedullary cavity. In such a case, external fixation is necessary. An external fixator is mounted around the arm or leg, similarly to a scaffolding attached to a building. Metal rings or rods are attached to bones using pins or screws. Each day, the bone fragments are moved by tightening special nuts or other external fixator components. The patient receives detailed instruction on the number of rotations needed each day. As the bone fragments are gradually separated, the gap between them is first filled with bone regenerate and then with mature bone tissue.

LENGTHENING OVER AN INTRAMEDULLARY NAIL

(lengthening over a nail, LON)

Lengthening over an intramedullary nail (lengthening over a nail, LON) is a procedure aimed at bones that are shorter than normal due to injuries, growth abnormalities or birth defects. The objective of treating bone deficiencies is achieving equal length of both limbs. It is important not only for esthetic, but also for functional reasons.

The LOA technique was a major advance. However, with the introduction of modern telescopic magnetic field-powered lengthening nails (Precice), its significance dwindled. Currently, it is mainly used in the countries where the Precice system is unavailable.

Surgery is followed by 3–4 expected hospitalization days. During that time, the patient and their relatives learn how to take care of the areas where the wires stabilizing the external fixator were inserted. They will also find out how the external fixator works and how to handle its specific components to lengthen the bone on their own. The lengthening (distraction) process usually begins after about 6–7 days post surgery.

The duration of the distraction phase depends on the patient’s limbs length differences. Usually, the bone can be lengthened by approximately 1 mm per day. In children, the time needed for the bone remodeling, i.e. turning into its mature, hard form following distraction, is usually twice as long as the lengthening itself. This time may be even three or four times longer in adults. Diabetes and smoking significantly reduce the pace of bone tissue regeneration.

It is estimated that bone remodeling requires approximately one month per each centimeter gained. For instance, to form three additional centimeters of bone tissue, approximately 30 days are needed for the regenerate (immature tissue) to form and then another 2–3 months for bone healing and mineralization. The patient would have to wear the external fixator for approximately 4 months. However the application of an intramedullary nail allows to significantly reduce the duration of this period and the external fixator may actually be removed directly after the lengthening process (after one month).

External fixators are metal apparatuses mounted on the bones of the arms, legs or feet using threaded wires or pins. Wires or pins are advanced through the skin and muscles into the bone. Since the major part of the apparatus remains outside of the body, it is called an external fixator. Usually only one fixator is used, but in some cases two or more are needed.

External fixators are used for gradual bone lengthening, straightening deformed bones or reducing the weight-bearing of a joint during its distraction.

When the apparatus is attached, the physician makes small incisions and then advances wires or pins into the bone. These are used to attach the apparatus frame, which is connected using clamps and rods. If the bone is to be lengthened or straightened, the physician surgically cuts the bone (performs osteotomy), dividing it into two bone fragments.

After the procedure, there is a 5–7 days’ waiting period, during which repair processes between bone fragments begin. It is followed by the distraction phase. The patient (and/or their friend/family member) receives instruction on how to alter the fixator settings, based on which they tighten/loosen nuts or other components of the apparatus several times a day, slowly increasing the gap between the bone fragments. The process of slow separation of bone fragments is called the distraction phase or lengthening. Bone fragments are separated at the rate of approximately 1 mm per day and the gap is filled in with newly formed bone tissue. The newly formed bone tissue is called bone regenerate. The distraction phase lasts until the bone is straightened (corrected). During this period, the patient attends follow-up visits every 10–14 days.

To support the healing process, patients should avoid nicotine in any form, include a lot of protein in their diet and take vitamin and mineral supplements. At this stage, the physician may instruct the patient to start using their limb, which also facilitates bone remodeling.

Following full bone consolidation, the external fixator may be removed in an ambulatory setting (after removing the apparatus, the patient does not stay at the hospital overnight). To ensure additional protection for the new bone tissue, the physician may put the limb in a cast or instruct the patient to wear an orthosis for 3–4 weeks following fixator removal. 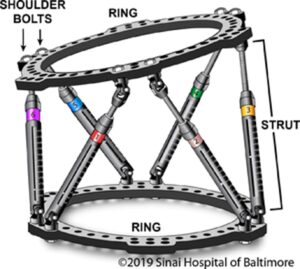 Monolateral (clasp) external fixators consist of one straight rail that is placed on one side of the arm, leg or foot. The rail is attached to the bone using screws that are usually hydroxyapatite-coated in order to improve the stability of anastomosis with the bone. Such devices be adjusted (tightened/loosened) by the patient (or their relatives) even several times a day. 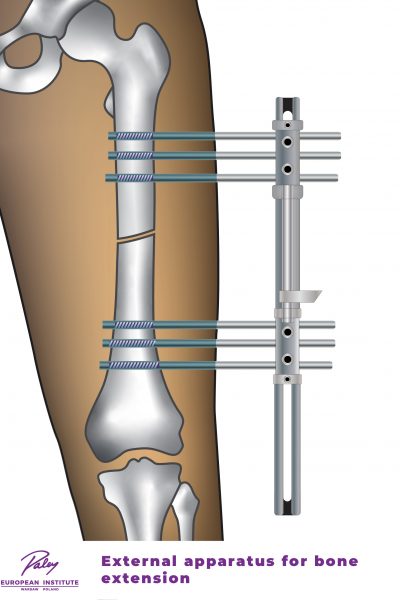 As in the case of any surgery, the limb lengthening procedure involves a certain level of risk that should be discussed with the treating physician in order to determine whether limb lengthening is the best option in a given situation.

Some of the side effects that may occur during the lengthening procedure include: pain, post-operative wound and/or bone infection, limited range of motion in joints, problems related to new tissue remodeling, damage to nerves or blood vessels, blood clots, apparatus-related complications and the necessity of performing additional procedures in order to preserve the correction effect or support healing.

A specific risk factor related to the LON technique is an infection around the implants. It occurs quite frequently and may spread over an implanted nail and thus involve the entire intramedullary canal.

Infections at the interface between wires/pins and the skin are the most common complications of treatment with an external fixator. The problem begins at the skin level and, if noticed early, may be easily cured. If left untreated, it may spread over deeper tissues and even bones.

The patient and their friends/family members must know the symptoms of an infection at the wire insertion site. The most frequent ones are tenderness and redness of the skin area. They are sometimes accompanied by a feeling of warmth, swelling, pain or exudation that is more intense than around the other implants. Before leaving the hospital, the patient or their family receive detailed information regarding infection symptoms and proper operated area care instructions.

Upon leaving the hospital, the patient with an external fixator receives a prescription for oral antibiotics. If signs of an inflammatory reaction develop, the prescription should be filed and antibiotics therapy should be initiated immediately. Prompt implementation of treatment (within 24 hours) is crucial. It is not necessary to call the center and confirm the occurrence of an inflammatory reaction prior to antibiotics administration. It is enough to call within 24 hours from initiating antibiotics therapy to inform that the patient has started treatment due to an infection around the implants. Redness, tenderness and exudation should start improving within 24–48 hours from treatment initiation.

The risk of a more serious, potentially life-threatening infection (e.g. toxic shock syndrome or necrotic fasciitis) is extremely low. For more than 30 years, thousands of procedures involving external fixators have been performed and fewer than 10 cases of such severe infections were reported. More serious infections around implants manifest with pain accompanied by one or more of the following signs:

If the patient experiences any of these signs, the treating physician or physician on duty should be informed instantly. It should be noted that such infections are rare. Treatment is simple, but must be initiated immediately. Usually, it requires an emergency room visit and intravenous antibiotic administration for 24 hours.